Among the many worthy causes that YBT Industries CEO Steven Odzer donates his time, effort and money to, New York’s AHRC has special significance because AHRC, a New York non-profit, focuses on serving people and children with intellectual and developmental disabilities. Steve Odzer is now looking to continue his support of people with disabilities in Nevada. 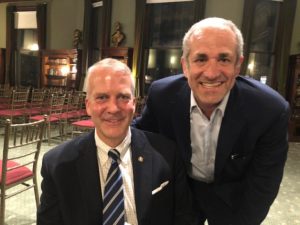 Steven Odzer is aware of the difficulties people – and especially children – may encounter due to prejudice, poverty and political circumstances beyond their control. An intellectual or developmental disability only exacerbates the discrimination for the most vulnerable.

A Jewish man who grew up in New York but who still has strong ties to Israel, where many of his family members still reside, Steven Odzer knows about the tough experiences of his ancestors and relatives. Odzer’s concern for the disadvantaged in his hometown of New York City prompted his interest in AHRC, and now continues in Arizona and Nevada.

AHRC Has a Mission to Improve Lives

A New York mother, Anne Greenberg, who sought help in caring for her mentally disabled five-year-old girl in 19048, is attributed as being the catalyst behind initiating what became the AHRC when she sought help for her dilemma by placing a two-line classified ad in a newspaper more than seven decades ago.

In those days, intellectually or developmentally disabled children were treated as outcasts – and often institutionalized. Medical advancements to treat their unique issues were still on the horizon. But a groundswell of support quickly gained critical mass and AHRC was able to define its mission of improving lives – not only sustaining AHRC’s impetus, but expanding its profile.

After a modest and uncertain start more than 70 years ago, AHRC has blossomed from its humble beginnings into a network of nearly two dozen centers throughout the metropolitan New York area, offering multiple services to not only children but most anyone with learning, cognitive, mental or physical disabilities.

The mission of AHRC intersects with the goals of YBT Industries CEO Steven Odzer. “We promote and support agencies that hire people with disabilities,” Odzer said. He also supports other charities and philanthropic organizations that assist disadvantaged people, including Bris Avrohom, a large non-profit founded in 1979 that helps Jewish immigrants from Russia adjust to life in the U.S.

To learn more about AHRC, go to ahrcny.org.

About YTB Industries and Steve Odzer